Jason Hughes is a white hat hacker – a ‘good’ hacker, working diligently to discover and identify ways in which existing systems can be hacked into. During one of his most recent forays, as described in TeslaRati he analyzed a “series of alphanumeric characters found embedded within Tesla’s most recent firmware 7.1”. According to Hughes, the update included the badges for the upcoming new Tesla model, the P100D. Hughes tweeted about this development to Tesla and to the public, and went happily to sleep.

And then things got weird.

According to Hughes, Tesla has attempted to access his car’s computer and significantly downgrade the firmware, assumedly in order to delete the information about the new model. Hughes managed to stop the incursion in the nick of time, and tweeted angrily about the event. Elon Musk, CEO of Tesla, tweeted back that he had nothing to do with it, and seemingly that’s the end of the story. Hughes is now cool with Musk, and everybody is happy again. 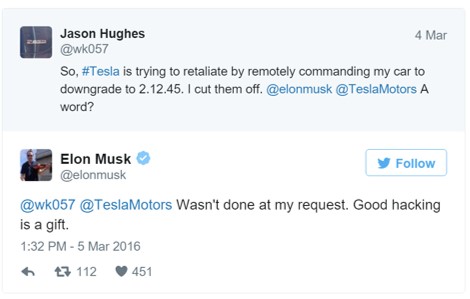 But what can this incident tell us about the future of private ownership?

A Decline in Private Ownership?

One of Paul Saffo’s rules for effective forecasting is to “embrace the things that don’t fit”. Curious stories and anecdotes from the present can give us clues about the shape of the future. The above story seems to be a rather important clue about the shape of things to come, and about a future where personal ownership of any networked device conflict with the interests of the original manufacturer.

Tesla may or may not have a legal justification to alter the firmware installed in Hughes’ car. If you want to be generous, you can even assume that the system asked Hughes for permission to ‘update’ (actually downgrade) his firmware. Hughes was tech-savvy enough to understand the full meaning of such an update. But how many of us are in possession of such knowledge? In effect, and if Hughes is telling the truth, it turns out that Tesla attempted to alter Hughes’ car properties and functions to prevent damages to the company itself.

Of course, this is not the first incident of the kind. Seven years ago, Amazon has chosen to reach remotely into many Kindle devices held and owned by private citizens, and to delete some digital books in those devices. The books that were deleted? In a bizarre twist of fate they’re George Orwell’s books – 1984 and Animal Farm – with the first book describing a dystopian society in which the citizen has almost no power over his life. In 1984, the government has all the power. In 2016, it’s starting to seem that much of this power belongs to the big IT companies that can remotely reprogram the devices they sell us.

I’m not saying that remote updates are bad for you. On the contrary: remote updates and upgrades of system are one of the reasons for the increasing rate of technological progress. Because of virtual upgrades, smartphones, computers and even cars no longer need to be brought physically to service stations to be upgraded. However, these two episodes are a good reminder for us that by giving the IT companies leeway into our devices, we are opening ourselves to their needs – which may not always be in parallel with our own.

I have not been able to find any legal analysis of Hughes’ and Tesla’s case, but I suspect if the case is ever being brought to court then Tesla might have to answer some difficult questions. The most important question would probably be whether the company even bothered to ask Hughes for permission to make a change in his property. If Tesla did not even do that, let them be penalized harshly, to prevent other companies from following in their footsteps.

Obviously, this is not a trend yet. I can’t just take two separate cases and cluster them together. However, the mechanism behind both incidents is virtually the same: because of the everpresent connectivity, the original manufacturers retain some control over the devices owned by end-users. Connectivity is just going to proliferate in the near future, and therefore we should keep a watchful eye for similar cases.

This is a new ground we’re travelling and testing. Never before could upgrades to physical user-owned devices be implemented so easily, to the benefit of most users – but possibly also for the detriment of some. We need to draw clear rules for how firms can access our devices and under what pretense. These rules, restrictions and laws will become clearer as we move into the future, and it’s up for the public to keep close scrutiny on lawmakers and make sure that the industry does not take over the private ownership of end-user devices.

Oh, and Microsoft? Please stop repeatedly asking me to upgrade to Windows 10. For the 74th time, I still don’t want to. And yes, I counted. Get the hint, won’t ya?