Two days ago, the picture above was posted on Facebook by Tom Martindale –

So – are there indeed two thousand people ignorant enough to share this message without realizing just how ridiculous it is? Isn’t that a reason to be worried about the state of the nation, about people’s education, and also to bemoan the tendency of social media to spread rumors far and wide without any criticism?

About two days ago, when the image was still fresh on Facebook and only gathered 500 shares, I took the liberty of going through all the “shares” of the picture that Facebook felt fit to show me. Altogether, I browsed through 86 “shares” – barely a fifth of the full number of people who shared the picture, but still a significant amount. I divided the shares into three categories-

Care to guess how many people fell for the hoax?

The results are pretty clear. Out of the 86 shares, only one treated the picture explicitly as if it symbolized the destruction of the Earth. Of the other 85 shares, 40 dismissed the picture outright or had it dismissed for them by their friends, while the rest are unknown – they didn’t write anything about the picture in their share. 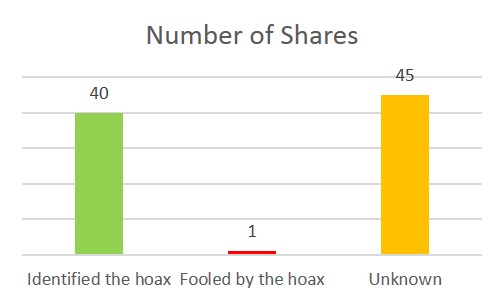 That’s actually very impressive. If we assume that the “shares” I counted reflect the overall distribution of shares, it means that for every person who fell victim to the hoax, we have forty people who identified it outright as a hoax, or had it explained to them immediately by their friends.

What can we learn from this (admittedly small) piece of data?

First, just because a certain image gets shared around the social networks, it doesn’t automatically mean that the sharers actually believe it is true or even worth reading. Many may be sharing it simply to ridicule others. I know this isn’t really a newsflash for all of you reading this post, but with everyone being so gloomy about the state of the nation’s ignorance and gullibility, it’s a good thing to keep in mind.

Second, while social networks are often rightly accused of spreading rumors, lies and misperceptions, it’s impossible to ignore their positive effects. Ignorant people can be found in every crowd, but they often don’t even know how ignorant they actually are. In the social network, it can be difficult to remain ignorant unless you’re doing so by choice. Whatever you share is open to debate, to criticism, to ridicule and to corrections by people who often know more and care more for the subject than you do.

Obviously, that’s not the end of the issue by far. Social networks can also be used to spread untruths of many kinds. In many issues, the loudest and most rabid voices are the most heard. If an alien from outer space would’ve logged into Facebook today, he would’ve figured that GMOs are hazardous to your health, vaccines cause autism, and marijuana cures cancer. At least two of the above are clearly and demonstrably false, and yet each conspiracy theory has gathered a large crowd of believers who will defend it online to their dying breath from any rational argument.

So: social networks – are they good or bad for public knowledge and understanding? That’s obviously a false dichotomy. Social networks work just like the agora – the gathering place where all the Greek citizens came together to discuss matters. They bring the agora to us, which means we’re going to get approached by many charlatans peddling their wares and beliefs, and also by the skeptics who are trying to warn us off. Social networks take away the loneliness of the individual, and turn us into a crowd – for good AND for bad at the same time.