A few months ago I wrote in this blog about the way augmented reality games will transform the face of the gaming industry: they’ll turn the entire physical world into a gaming arena, so that players would have to actually walk around streets and cities to take part in games. I also made a forecast that players in such games will be divided into factions in order to create and legitimize rivalries and interesting conflicts. Now Pokemon Go has been released, and both forecasts have been proven true immediately.

By combining the elements of augmented reality and creating factions, Pokemon Go has become an incredibly successful phenomenon. It is now the biggest mobile game in U.S. history, with more users than Twitter, and more daily usage time than social media apps like WhatsApp, Instagram or Snapchat. One picture is worth a thousand words, and I especially like this one of a man capturing a wild Pidgey pokemon while his wife is busy giving birth.

But is the game here to stay? And what will its impact be on society?

Pokemon Go in the Long Haul

It’s no wonder Pokemon Go has reached such heights of virality. Because of the game’s interactions with the physical world, people are being seen playing it everywhere, and in effect become walking commercials for the game. Pokemon Go also builds on the long history – almost twenty years – of pokemon hunting which ensures that anyone who’s ever hunted pokemon just had to download the app.

Will the game maintain its hype for long? That’s difficult to answer. Dan Porter, one of the creators of Draw Something – a game that garnered 50 million downloads in just 50 days – wrote a great piece on the subject. He believes, in short, that the game is a temporary fad. It may take a year for most people to fall off the bandwagon, so that only a few millions of the hardcore gamers will remain. That’s still an impressive number, but it’s far from the current hype. As he says –

“For the casual Pokemon Go player, the joy of early play I believe will eventually be replaced by gyms that are too competitive and Pokemon that are too hard to find.”

I agree with his analysis, but it does depend on one important parameter: that the game does not undergo evolution itself, and continually readapt itself to different groups of users. Other social games, like World of Warcraft, have successfully undergone this transition to maintain a large user base for more than a decade. Niantic may be able to do that, or it may not. In the long haul it doesn’t matter: other, more successful, AR games will take over.

Pokemon Go is bringing in a lot of revenues right now, with the estimates ranging from $1 to $2.3 million a day. Some analysts believe that the game could pull in a billion dollars a year once it is launched worldwide. That’s a lot of money, and every half-decent gaming company is going to join the race for AR very soon. It could be Blizzard that will recreate Starcraft’s fame in an AR fashion, with teams running around buildings, collecting virtual resources and ambushing each other. Or maybe Magic the Gathering or Hearthstone, with players who can collect thousands of different cards in Hearthstops around the world much like Pokemon Go, and use them to build decks and fight each other. Heck, I’d play those, and I bet so would the tens of millions of gamers whose childhood was shaped by these games. The dam gates, in short, have been broken open. AR games are here to stay.

And so we must understand the consequences of such games on society.

Pokemon Go is already starting to change the way people interact with each other. I took the following picture from my house’s window a few days ago, depicting several people walking together, eyes on their phones, without talking with each other – and yet all collaborating and being coordinated with each other. They were connected via the layer of augmented reality. In effect, they were in a world of their own, which is only tenuously connected to the physical world.

In Australia, a hastily advertised Pokemon Go meeting has brought together 2,000 players to a single park, where they all hunted pokemon together. And coffee shops-turned-gyms around the world have suddenly found themselves buzzing with customers who came for the win – and stayed for the latte. And of course, the White House has been turned into a gym, with all three Pokemon Go teams competing over it. 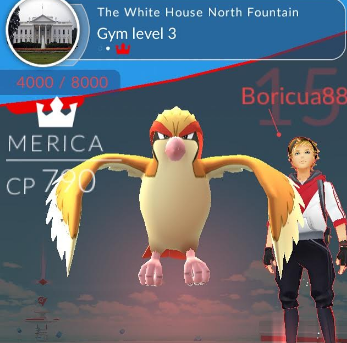 The game has made people to go to places they would not ordinarily go to, in their search for pokemon. As a result, at least two dead bodies have been discovered so far by players. If you watch players walking on the streets, you’ll also notice their peculiar pattern of movement: instead of following the road, they’ll periodically stop, check their smartphones and change course – sometimes making a U-turn. They’re not following the infrastructure in the physical world, but rather obeying a virtual infrastructure and entities: pokestops and pokemon.

And that’s just a sign of what’s coming, and of how power – the power to influence people and their choices – is starting to shift from governments to private hands.

What is power? While many philosophers believed that governments had power over their citizens because of their ability to mobilize policemen, the French philosophers Louis Althusser and Michel Foucault realized that the power control mechanisms are inherent in society itself. Whenever two people in a society exchange words with each other, they also implicitly make clear how each should behave.

Infrastructure has the same effect over people. And has been used since time immemorial as a mechanism for directing the populace. For a very long time now, governments used to control the infrastructure in urban places. Governments paved roads, installed traffic lights and added signs with streets names. This control over infrastructure arose partly because some projects, like road paving, are so expensive but also because things like traffic lights and signs have an immense influence over people’s behavior. They tell us where we’re allowed to go and when, and essentially make the government’s decisions manifest and understandable for everyone. There’s a very good reason that I couldn’t erect a new traffic sign even if I wanted to.

But now, with Pokemon Go, the gaming industry is doing just that: it’s creating an alternative virtual reality that has new rules and different kinds of infrastructures, and merges that virtual reality with our physical one so that people can choose which to obey.

Is it any wonder that authorities everywhere are less than happy with the game? It has fatwas being issued against it, religious leaders wanting to ban it, Russian politicians speaking against it, and police and fire explaining to citizens that they can’t just walk into jails and fire stations in their search for pokemon.

In the long run, Pokemon Go and AR in general symbolizes a new kind of freedom: a freedom from the physical infrastructure that could only be created and controlled by centralized governments. And at the very same time, the power to create virtual infrastructure and direct people’s movement is shifting to the industry.

What does that mean?

In the short term, we’re bound to see this power being put to good use. In the coming decade we’ll see Pokemon Go and other AR games being used to direct people where they could bring the most good. When a kid will get lost in the wilderness, Niantic will populate the area with rare pokemon so that hundreds and thousands of people will come search for them – and for the child too. Certain dangerous areas will bear virtual signs, or even deduct points from players who enter them. Special ‘diet’ pokemon will be found at the healthy food sections in stores.

In the long run, the real risk is that the power will shift over to the industry, which unlike the elected government does not have any built-in mechanisms for mitigating that power. That power could be used to send people to junk food stores like McDonald’s, which as it turns out is already in partnership with Pokemon Go. But more than that, AR games could be used to encourage people to take part in rallies, in political demonstrations, or even simply to control their movement in the streets.

This power shift does not necessarily have to be a bad thing, but we need to be aware of it and constantly ask what kind of hidden agendas do these AR games hold, so that the public can exercise some measure of control over the industry as well. Does Pokemon Go encourage us to visit McDonald’s, even though it ultimately damages our health? Well, a public outcry may put a stop to that kind of collaboration.

We’ve already realized that firms that control the virtual medium, like Facebook, gain power to influence people’s thinking and knowledge. We’ve also learned that Facebook has been using that power to influence politics – although in a bumbling, good-natured way, and seemingly without really meaning to. Now that the physical world and the virtual world become adjoined, we need to understand that the companies who control the virtual layer gain power that needs to be scrutinized and monitored carefully.

Pokemon Go is not going to change the world on its own, but it’s one of the first indicators that can tell us how things are about to change when physical reality is augmented by virtual ones. The critical question we must ask is who controls those added layers of reality, and how can we put constraints on the power they gain over us. Because we may end up controlling all the pokemon, but who will gain control over us?